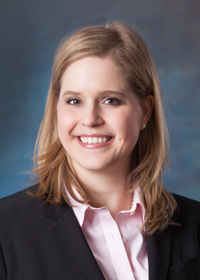 Margo Kimble Dorris focuses on business and banking law. She works tirelessly to provide the best legal services and counsel to help her clients reach their goals. Margo primarily practices in Denton County and is admitted to practice before the United States Supreme Court.

Personal
During law school, Margo clerked for Liberty Institute (now First Liberty Institute) where she worked on cases with the Texas Attorney General’s office and assisted with an Amicus Brief filed by Liberty Institute with the Supreme Court of the United States in Connick v. Thompson, 131 S. Ct. 1350 (2011). Margo also clerked for Hon. Sherry Shipman (Shipman Steppick, P.C.), Hon. Robert Ramirez with the County Court at Law No. 2, and briefly interned with Senator Jane Nelson.

Margo is a southeast Texas native, but since law school, she has happily settled down in Denton with her husband and daughter. She enjoys being involved in the Denton community and has strong ties to the Denton business community.

Education
Margo received her B.A. and B.F.A. from the University of Oklahoma. She received her Juris Doctorate from Oklahoma City University School of Law, where she was on the Philip C. Jessup International Moot Court Team and named to The Order of Barristers for excellence in courtroom advocacy, and Dean’s List.